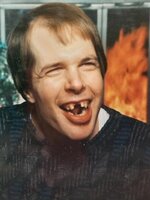 James S. White passed away after an extended illness on Friday, September 10, 2021 at the Kaplan Hospice Facility in Newburgh. He was 60.

James was born August 3, 1961 in Poughkeepsie to the late Alice Watson White and James A. White Jr. James lived in various parts of the Hudson Valley and was part of the Greystone family for much of his adult life; he settled in Wappingers Falls for more than a decade.

James was a man of very few words, but spoke volumes with his beautiful blue eyes and amazing smile. Those blue eyes sparkled brightly with mischief, as he would sit next to his friends and unknowingly sneak things away from them. It was only when they caught him that his smile turned into laughter that was loud and contagious! One of his greatest memories was a trip to Disney with his beloved Greystone family.

He was such a social man who enjoyed being in the company of others, especially his best girl Lucy. The two of them shared a very special bond and they were lucky to have shared many years together. James had an amazing ability to draw you in, touch your heart and provide you with unconditional love, and for that he will be greatly missed.

Turn the radio up—blast some loud rock and roll and think fondly of James! We know he is listening to his music with a big smile on his face and a happy soul.

In addition to his Greystone family, James leaves behind his sister, Judy Alley and her husband, John; nieces, Ashley Smith, Kierston Meeks, Alicia Meeks and Olivia Alley; and 6 grand-nieces and grand-nephews.

In addition to his parents, he was predeceased by his step-father, Floyd J. McClafferty.