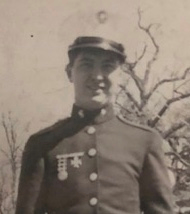 Thomas Michael Sherban of Hyde Park peacefully passed away surrounded by his loving family on January 18, 2019 after a brief illness. He was 95 ½.
Son of the late Michael and Julia Sherban, Thomas was born at home in Beacon on June 5, 1923. He married Gilberta Newman on November 29, 1946 at St. Mary’s Church in Poughkeepsie. Mrs. Sherban preceded him in death, passing on April 12, 2005; he was with her every day at the nursing home until her passing. Thomas and Gilberta lived in Poughkeepsie all of his life, moving to Hyde Park in 1981. He was proud to live alone and be totally independent until his last days of life.
Thomas graduated from Nativity School and Poughkeepsie High School. At the age of 19, he enlisted in the United States Marine Corp on October 16, 1942; he went on to Parris Island, SC for his basic training. Since the war had already begun, they had 12 weeks of training condensed into six weeks. Thomas served in the Pacific on the Marshall Islands and the Marianas, including Saipan, Guam, Tinian, Iwo Jima and Okinawa. He was honorably discharged as a Sergeant on November 4, 1945. His family was so proud of his service and called him their Marine and their Hero. “Semper Fidelis, Dad!”
Thomas came back to the States and began working. He was a milkman, postman and a breadman. He loved outside work and loved people. Prior to his retirement, he was a school bus driver for the Arlington Central School District for over 20 years.
He was very generous and gracious in giving to charities such as St. Jude, Wounded Warriors, SPCA, Children’s Cancer and many others. He had a good heart. Thomas was also quite witty and funny; what a memory! He was an avid reader and loved knowledge. He also loved airplanes. Thomas was an airplane technician in the Marines and later enjoyed modeling planes.
Thomas enjoyed all sports, especially playing them with his grandchildren. He loved music and dancing, and playing the saxophone. He surely will be missed by his family.
Survivors include his daughter, Dee Bomba and her husband, Gary of Hyde Park; grandsons, Jeffrey Sherban of Poughkeepsie, Jason Bomba of Fishkill, and Justin Bomba and his wife, Nicole of Wappingers Falls; and his great-grandchildren, Tyler Bomba, Gianna Bomba and Briella Bomba.
In addition to his beloved wife and parents, Thomas was predeceased by his only son, Richard Sherban; his sisters, Mary Szabo and Julie Toth; and his brother, John Sherban. His greatest loss was the loss of his son and wife.
Private services will be held at a later date. In lieu of flowers, memorial donations may be made in Thomas’ name to one of his favorite aforementioned charities.
Arrangements are under the direction of Straub, Catalano & Halvey Funeral Home, 55 East Main Street in Wappingers Falls. To send the family a personal condolence, please visit our website at www.StraubCatalanoHalvey.com.

I love you doll!