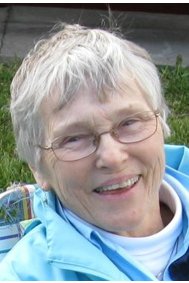 Janet Sovocool Gardell (née Janet Marie Sovocool), age 85, of Wappingers Falls, NY and formerly of Oneonta, NY, passed away on Thursday, September 5, 2019. She was surrounded by family and under hospice care at Vassar Brothers Medical Center.

She will be greatly missed by her loving husband of 62 years, Eric; in-laws John and Nancy Larson of Palo Alto, CA; three sons, Steven E.  and wife Cynthia of North Andover, MA, David L. and wife Debra of Fairfax, VT and Richard M. and wife Susan of Rockaway, NJ;  grandchildren Christopher, Paige, Elizabeth, Levi and Eric; and many other family and friends.

Janet was born in Addison, New York and raised on family dairy farms in Unadilla and Oneonta, New York.  She graduated from Oneonta State Teachers College with a BS in Education (1955) and was a grade-school teacher, continuing to teach part-time when her children were young.  Soon after marrying Eric at East Greenbush Methodist Church, they settled in Wappingers Falls, where they built their home and raised their family.  Janet took great joy in her family and being a homemaker, mastering the art of how to stretch a dollar in those early years.  Janet was an instrumental member of the founding committee for the Wappingers Falls Meals on Wheels.  Janet was a pillar of the United Methodist Church in Wappingers Falls, holding most leadership positions over time. Janet worked with her husband in their surveying and engineering business, getting her Professional Land Surveying license at the young age of 59 - passing the test on the first try. She and Eric were active members of the Mid Hudson Valley Chapter of the NY State Association of Professional Land Surveyors.  Janet enjoyed traveling throughout the USA and the world, reading, knitting and genealogy. She was an accomplished seamstress and baker, winning State and County Fair awards as a young lady and a homemaker. She created many beautiful quilts that will long be cherished by the family.

Janet and Eric are more recently members of Calvary Chapel of the Hudson Valley in Poughkeepsie.

Family will receive friends on Tuesday, September 10, 2019 from 10 am to 12 noon at Straub, Catalano & Halvey Funeral Home, 55 East Main Street in Wappingers Falls. A funeral service at the funeral home will follow at 12 noon.

Donations to the Alzheimer's Association or to the charity of your choice in lieu of flowers are encouraged.

To send the family a personal condolence or for directions, please visit our website at www.StraubCatalanoHalvey.com.

To send flowers to the family or plant a tree in memory of Janet Gardell, please visit Tribute Store
Tuesday
10
September