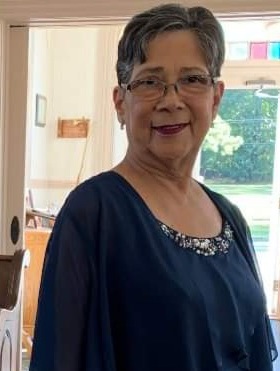 Maria Montero was born in The Bronx, NY on December 27, 1953. Maria is the second child of Ana Maria Mena-Vila and Fernando Luis Mena. Siblings on her father's side include two half sisters Maricel Mena and Maria Teresa Mena; on her mother's side were four additional siblings: which include an older brother, Fernando Luis Mena, Jr., and three younger siblings: Gloria Jeanette Mena, Teresa Ana Mena, and Luis Angel Mena Vila. Maria was married to her childhood sweetheart, Jimmy Montero, on December 16, 1973. This union is succeeded by the births of their three children: Jimmy Montero, Jr., Jeffrey Montero, and Jeremy Montero. Maria's great compassion for humanity opened her home and blessed her family with continued growth. Family, as a foundation of her strength, had her happily welcome and adopt two children: her daughter, Carmen Colon, later known as Schuyler Jeanette Montero; and her son, Kevin Joseph Marrero. The assembly of Maria's family became a solidified bond through commitment, love, and teachings passed on between her and her husband. This union was a commitment to excellence and a blueprint for their children to live by. It is because of Maria's irrefutable strength, courage and wisdom that her family has continued succeeding in the face of any adversity. This devotion and leadership has guided her children and laid out a template for family development. The first blessing was a granddaughter, Sabrina Cerrati, daughter of Schuyler. Sabrina immediately recognized Maria as Abuelita and accepted her full of love and innocence. The extension of grandchildren continued with the birth of her eldest son's children: Jailene, Jaydin, and Julianna Montero. The joy created by her grandchildren was clearly recognizable through the special smiles and laughter. Those smiles would quickly continue with the addition of her second son's child, Madelin Myers-Montero. Her spirit has always been captivating, providing reassurance and comfort to those in her presence. This is likely the basis of her sons' luck in partnerships. Young boys become great men when the foundation is strong! Few have come and gone leaving imprints, but the best connections are the truest. Those connections, which Maria shared before returning home, were with her daughters-in-law: Kendra Marrero, Liz Montero, and Melissa Santiago. Thank you, Maria Montero; Wife-Mother-Sister-Abuelita/Mama-Friend, for an incredible foundation, indisputable commitment and unwavering love. It is by your influence that your sons have identified and accepted worthy partners. We will be our best today in case tomorrow isn't delivered. We love you.
To send flowers to the family or plant a tree in memory of Maria Montero, please visit Tribute Store
Saturday
28
November