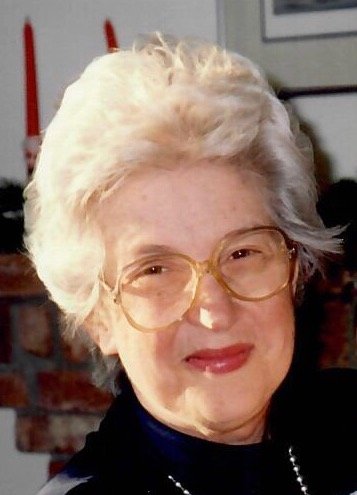 Poughkeepsie – Mary Ann Totta, 90, died peacefully on January 1, 2021 at her home following a long illness. She was able to stay at home her final years due to the extraordinary efforts of her husband, Paul Totta, and caregivers. The family wishes to thank Hudson Valley Hospice for their valuable assistance. Mary Ann was born on December 13, 1930 in De Pere, Wisconsin. Her initial education was in a one room schoolhouse - Lincoln School in rural De Pere. She graduated at the top of her class at East De Pere High School in 1948, then continued her education at St Norbert’s College in the same town. Mary Ann transferred to the University of Wisconsin at Madison where she graduated in 1952 with a bachelor’s degree in mathematics – the subject she loved her whole life. Her first job was at General Electric in Cincinnati, Ohio working with early computer technology. There she met Paul Totta, who she would marry, in 1954. They moved to Fort Wayne, Indiana. Their first son, Mark Totta, was born in 1955 and Mary Ann became a full time homemaker. A second son, Michael Totta, followed in 1958. The family moved to jobs in Schenectady and then Bridgeport, Connecticut. Ultimately they settled in Wappingers Falls in 1960 and then the Town of Poughkeepsie in 1961 when her husband began a long, and successful career at IBM. She raised her two boys while substitute teaching in the Wappingers School District. Mary Ann enrolled at SUNY New Paltz in the late 1960s earning a master’s degree in math education. She taught math for a few years in the 1970s at Ketcham High School. In the 1980s she began a new career at IBM coming full circle to again work in computer science. She retired in 1989. After this, she began tutoring students at Ketcham and Lourdes High Schools. Mary Ann was pre-deceased by her father, William Earl Cashman, who died of pneumonia in 1939. Her mother, Antoinette (Baeten) Cashman, who passed away in 1975, ran the family farm ultimately with the help of Mary Ann’s two brothers. Those two brothers spent their lives in dairy farming within a few miles of their childhood home. Both brothers are also deceased – Edward Cashman passed away in 1981 in a farm related accident, and John Cashman passed away in 2012. Mary Ann was also predeceased by two nephews – Edward’s sons – Ervin Cashman in 1973, and William “Billy” Cashman in 1975. Mary Ann is survived by her husband of 66 years, Paul Totta, and also her two sons, Mark Totta (Mark Lott) of Studio City, California, and Michael Totta (Laura Frank Totta) of Yarmouth, Maine with grandchildren Andrew Totta of San Diego and Alison Totta of Washington, DC. She is also survived by brother-in-law and sister-in-law Philip Nye and Eleanor Totta Nye of Warwick, New York. Mary Ann is survived by many nieces and nephews with their extended families. In Wisconsin, Edward’s children remain in the De Pere area - Suzanne Cashman, Patricia Cashman Desotell, Michael Cashman, Karen Cashman, Dennis Cashman, Lois Cashman Cornette, and Keith Cashman. John’s children also remain – Patrick Cashman of Madison, WI, Stephen Cashman of De Pere, and Barbara Cashman Baudhuin of Brussels, WI. Mary Ann is also survived by nephews David Nye of Allegany, New York and Christopher Nye of Myrtle Beach, South Carolina. Mary Ann will be remembered as a devoted wife and mother. Possibly due to her early life on a farm, she always loved animals including her cats and her children’s dogs. After retirement, she enjoyed traveling to IBM events with her husband, Elder Hostel educational events, and visiting her family in Maine, California, and Wisconsin. She particularly loved Scandinavia, and modern Scandinavian design. An endowment to fund math and science education has been started for Roy C Ketcham High School in the name of both Mary Ann and Paul Totta. In lieu of flowers or to honor the memory of Mary Ann, donations to this fund will be gladly accepted with checks written to the Community Foundations of the Hudson Valley, 80 Washington Street, Suite 201, Poughkeepsie, New York 12601. Please write “Totta Fund” on the memo line. On-line fund donations through the Community Foundations of the Hudson Valley will also be accepted. Due to COVID, there will be no visiting hours. A Mass of Christian Burial will be held at St Mary’s Catholic Church in Wappingers Falls at 10 AM on Friday, January 15, 2021. Masks must be worn and social distancing practiced during services. A private graveside ceremony will follow at Fishkill Rural Cemetery. A live stream of the Mass will be available at the funeral home website. To view service, for directions or to send a personal condolence, please visit www.StraubCatalanoHalvey.com.
To send flowers to the family or plant a tree in memory of Mary Totta, please visit Tribute Store
View Funeral Webcast
Friday
15
January