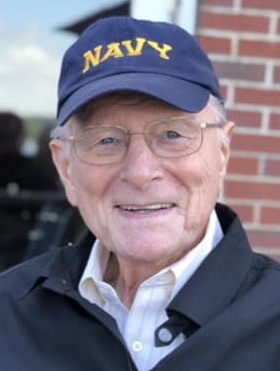 Donald S. Weed died on his 96th birthday, peacefully in New Hampshire, where he lived with his oldest daughter, Pam Lafleur and her husband, Richard. He had just celebrated his birthday, in grand style, with family the previous day.  He left this world happy, peaceful and full of love.

Don was born in Beacon, NY to Helen (Stripple) and Thurlow Weed. He grew up with his brother, Thurlow (Ted) Weed, who predeceased him.

He attended Beacon Public Schools and went onto Clarkson University where he was President of his fraternity. He was an officer in the Navy during World War II and the Korean War. Don had a long, successful career at IBM for 42 years before he retired.

Don married Marlene Tayntor in 1952; she predeceased him in 1999. Together they raised 4 children, whom they couldn’t be more proud of and the legacy they have left behind. He is survived by his oldest son, Tracy Weed and his wife, Stacy of Atascadero, CA; his oldest daughter, Pam Lafleur and her husband, Richard of Derry, NH; his youngest son, Phil Weed and his wife, Bernadette of Alpharetta, GA; and his youngest daughter, Annie LoCascio and her husband Joe, of Allendale, NJ.  He has 12 grandchildren: Sarah (Lafleur) Halonen, Lindsay (Weed) Meinert, Scott Lafleur, Stephanie (Weed) Holzmer, Amy Lafleur, Kevin LoCascio, Valerie (Weed) Robertson, Ryan Weed, Sophia LoCascio, Jason LoCascio, Jill (LoCascio) Yablonski and Kris LoCascio; and 3 great-grandchildren: Sullivan Halonen, Gabe Meinert and Gwyneth Holzmer. .

Together, Don and Marlene loved to spend time with their family and friends. They loved to entertain, travel and were faithful and loving in all that they did. Don faithfully and selflessly cared for Marlene during her seven year illness and demonstrated such devotion, patience and love.

He married Lee MacAvery in 2001. Together they lived with Danny, Lee’s son, whom he loved like his own, along with Lee’s entire family. They spent time traveling and enjoying their extended, blended families. Lee predeceased Don in 2016.

Don developed special friendships that have lasted his entire life. Don is survived by Bill Partridge, his dear friend since kindergarten. They were each others’ best men in their weddings and friends until the end.

He enjoyed his family and friends and loved a good party. He was an avid skier, and loved to golf, play tennis and travel. He had a passion for cooking. Don loved to read and he continued to learn as much as he could.  He was tech savvy and interested in every new gadget that came out.

Don was blessed to have had such love and loyalty in his beautiful and full life. He was a model of elegance and integrity. He was intelligent and well bred; a true gentleman.

He left a legacy that will forever change many lives for the better.

A funeral service will be held Wednesday, June 16, 2021 at 11 a.m. at Zion Episcopal Church, 12 Satterlee Place in Wappingers Falls.

For directions or to send the family a personal condolence, please visit www.StraubCatalanoHalvey.com.

To send flowers to the family or plant a tree in memory of Donald Weed, please visit Tribute Store
Tuesday
15
June