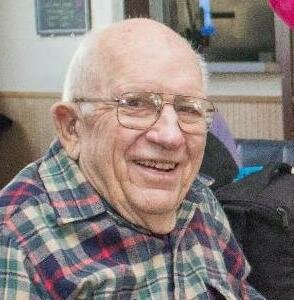 John C. "Jack" Webber, a resident of Poughkeepsie, entered into rest Wednesday, February 2, 2022 at Putnam Ridge in Brewster. He was 95.

Son of the late Harold and Minnie Barber Webber, he was born February 2, 1927 in Hughsonville. He was a graduate of Wappingers Schools. ON June 6, 1948 at St. Mary’s Church in Wappingers Falls he married the former Joan C. Conroy. Mrs. Webber preceded him in death on November 20, 2003.

Jack proudly served his country in the United States Navy from 1944 to 1946 and was recalled in 1950 for the Korean War. He was former Chief of the New Hamburg Fire Company and former Chairman of the Board of Fire Commissioners.  Jack retired as a staff chemist with IBM in East Fishkill in 1986 after thirty-five years of service. He was also a member of the Quarter Century Club at IBM.

Funeral services will be private.

To plant a beautiful memorial tree in memory of John Webber, please visit our Tree Store

A Memorial Tree was planted for John
We are deeply sorry for your loss ~ the staff at Straub, Catalano & Halvey Funeral Home
Join in honoring their life - plant a memorial tree
Services for John Webber
There are no events scheduled. You can still show your support by planting a tree in memory of John Webber.
Plant a tree in memory of John
Share Your Memory of
John
Upload Your Memory View All Memories
Be the first to upload a memory!
Share A Memory
Plant a Tree